Asylforum is defined by the people who come. We focus our activities based on what participants like to do. Often it is helping with letters, practising danish or playing games but people can also just hang out. You can read our articles here. You can also read our “Persondatapolitik” here.

We can all be contacted on e-mail: kontaktasylforumaalborg@gmail.com

Asylforum started out in 2012 at 1000 Fryd where a group of volunteers got together to help Kurdish-Syrian asylum-seekers get some attention to their situation. The group started visiting centers more regularly in mainly Hanstholm and Brovst. 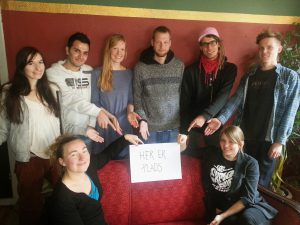 In 2013 Asylforum got more organized. It had a big party where it invited people from the centers and it was also part of planning and carrying out Mangfoldighedsdagen, which is now an annual event. In addition, we started meeting regularly on the first Sunday of every month and we expanded our visit list to also include Ranum, Skørping and Frederikshavn.

In 2014 we moved from 1000 Fryd to Kofoedsskole, where there were more facilities, such as sewing machines and kitchen. In 2014 we started up with sewing activities but after many refugees started being allowed to stay in Aalborg we started to grow. In 2015 we had danish classes and we were good at showing new people around in Aalborg. 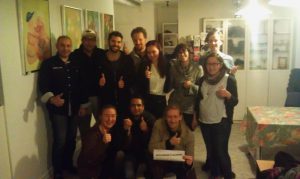 In 2016 we became better at cooking together and making events. We continued to meet twice a week practicing danish, cooking and helping each other out but in the end our partnership with Kofoedsskole was terminated and in the end of 2016 until March of 2017 we were located at Huset, in different rooms and it was not optimal. Members of the board though of dissolving Asylforum or returning to just visiting camps but at the General Assembly of 2017 a new board was elected which wanted to return to what we used to be. We found some good places to stay and stuck with the one in Søndergade 12 every Friday.

In 2018 we still had many members of different nationalities though most were from Eritrea. People know where we are and what to expect. We aim to become better at offering the type of information people need but meanwhile at our core is a community of friends where everyone is welcome no matter where your from, your religion, age or whatever else. We meet informally and teach danish, help with letters and practical work. Some get help with Math, English or IT while others hang, play games and practice Danish by chatting. Occasionally we go for trips, if we get a good offer and can afford it but you can see this under events. 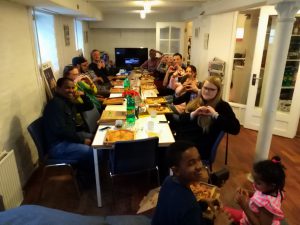 We had a long corona shut down and when we started up again most for the people who used to come had families and jobs to attend to so we started including the kids in activities or well, mainly teaching the kids from Eritrea, speaking Tigrinya, how to spell and write in the language of their parents.

We stayed at Søndergade 12 from 2017 to 2022 and now we are located in the International House where rent is free and people are better at cleaning up after themselves. We continue Tigrinya lessons for kids and help with whatever is needed, these days Mit ID and the usual constant asylum renewals. 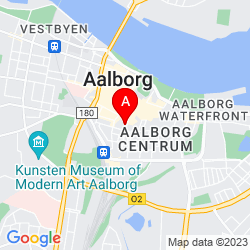